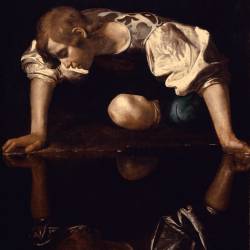 Caravaggio, whose full name was Michelangelo Merisi da Caravaggio, was born in 1571 in Milan and died in 1618 in Porto Ercole, Tuscany. He began his artistic training in Milan in the studio of Simone Peterzano. From 1591 – 1592, he left the studio to continue his apprenticeship in the famous studio of the Cavalier d'Arpin in Rome, an eminent artistic centre of the time. The first known early works of the painter are essentially still lifes, such as Corbeille de fruits, painted in 1593 and considered the first autonomous still life in painting. He then became known to collectors, for whom he produced easel paintings, generally of small dimensions.1598 marked the beginning of his period of public commissions, which ended in 1606 when he committed a murder. Caravaggio was sentenced to dead and went into exile in Naples, then Malta and finally Sicily. There, he was pardoned by the Pope and returned to Italy. However, he died of illness on this arrival in Tuscany and never returned to the “eternal city” (Rome). Because of his early death, Caravaggio's oeuvre is relatively small, and only about forty paintings are attributed to him with certainty. Poussin said of Caravaggio that he was "born to kill painting" because of the radical aesthetics he introduced into art. These new artistic conceptions broke radically with tradition. While his so-called "dal natural" art was based on a direct and thorough study of nature, he did not idealise it. As he considered painting as immediate art, he refuses to practice drawing. This Caravaggio personal style is characterised by tightly framed compositions, painted in restricted chromatic ranges and playing with light and shade (chiaroscuro). He began a true "revolution in painting" and his innovation would be later taken up by young artists who were fascinated by his art. He became part of the myth of the modern artist, a solitary and complex man who refused to train students, preferring to withdraw into the secrets of his studio.