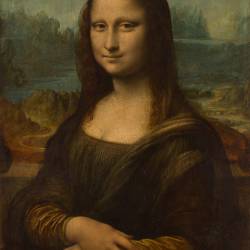 Leonardo da Vinci (1452-1519) is regarded as the epitomy of the Renaissance humanist ideal, the definitive Renaissance Man . He was a pioneer of a great variety of interests, including painting , sculpture, architecture, science, music, mathematics, anatomy, astronomy, geology among many others.

In 1446 he was apprenticed to the workshop of the Florentine artist Verrochio, under whom Da Vinci studied until 1472 when he became a Master of the Guild of Saint Luke , the guild of artists and doctors of medecine. His earliest known surviving work is a pen and ink drawing of the Arno valley from August 5th, 1473.

He is considered one of the greatest painters of all time , many of his works are cultural icons, such as The Mona Lisa, The Last Supper and the drawing the Vitruvian Man.

A painting by Leonardo, Salvator Mundi, sold for a world record $450.3 million at a Christie's auction in New York, 15 November 2017, the highest price ever paid for a work of art.