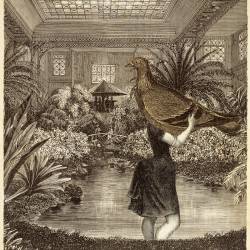 Nothing marked him out to become the Dadaist painter we now know him as, having first studied philosophy in Bonn, specialising in psychopathology and the art of the insane. However, he decided to abandon his studies and devote his life to art after visiting the Sonderbund exhibition in Cologne. Overwhelmed by French painting and its artists, he no longer had any doubts about the path he should follow and soon travelled to Paris to follow this calling. This journey greatly influenced his art, although he eventually left the French capital for New York, where he assisted the development of Abstract Expressionism, before moving to Italy, where he was surrounded by the most beautiful works in the world. He soon returned to Paris, as he wanted to give his art an unmistakably French flavour. By capturing the horrors of the First World War, Ernst wanted to use his painting to denounce the absurdities of society, which was somewhat outdated in his eyes.

After me, sleep, or Hommage to Paul...
Max Ernst