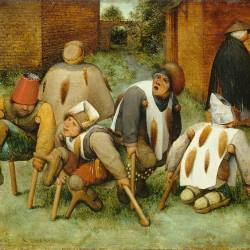 Pieter Brueghel the Younger ( 1564 – 1638) was a Flemish painter, known for numerous copies after his father Pieter Bruegel the Elder's work as well as his original compositions. The large output of his studio, which produced for the local and export market, contributed to the international spread of his father's imagery.