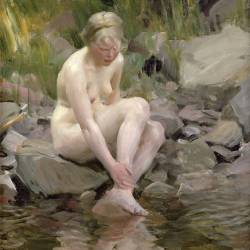 Leon Anders Zorn ( 1860-1920) was one of Sweden's foremost artists on the cusp of the nineteenth and twentieth centuries. After studying at the Royal Academy of Swedish Arts in Stockholm he came to see great success as a painter, sculptor and etcher.  Among his portrait subjects were King Oscar II of Sweden, Grover Cleveland, William H Taft and Theodore Roosevelt. He established the swedish literary award, the Belllman Prize in the year of his death,1920.