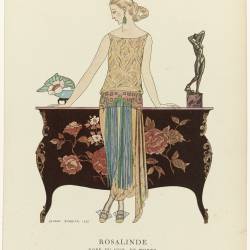 George Barbier was born on October 16, 1882 in Nantes. He studied at the Ecole Nationale Supérieure des Beaux-Arts in Paris where he was a student of Paul Albert Laurens. He quickly gained notoriety and, in 1910, he exhibited at the Salon des humoristes, at the Boutet de Monvel gallery and, until his death, at the Salon des artistes décorateurs. Throughout his career, he worked for various satirical newspapers such as Le Rire and La Baïonette. George Barbier is also known for his fashion illustrations and sets for theatre, cinema or music hall. He died on March 16, 1932 in Paris.

See all
artworks from
George BarbierDiscover