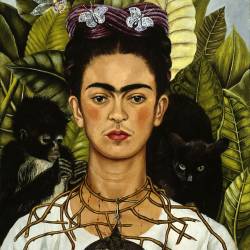 Frida Kahlo was born on July 6, 1907 in Coyocan, Mexico City, Mexico and is often considered as one of the country’s greatest artist. She grew up in her family home which she latter referred as the Blue House or Casa Azul. She was raised in a cosmopolitan and artistic environment. Her father was a Dutch- born photographer who immigrated to Mexico where he married the artist’s mother, Matilde. From a young age she suffered from a poor health and contracted polio at the age of 6 and had to be bedridden for nine months. She began her artistic training in 1922 at the National Preparatory Scholl in Mexico where they met for the first time her future husband Diego Riviera. The same year, she had a tragic bus accident and was seriously injured. A steel handrail impaled her trough the hip, fracturing her spine and pelvis and leaving her in a great deal of pain. At the age of only 18, this accident changed her life forever and she will suffer from lifelong pain and medical problems. Stuck in her hospital bed, she turned to painting and installed a special easel and a mirror above her bed. The following year, she finished her now worldwide famous first Self-portrait. She once said: “I paint myself because I am the subject I know the best”. In 1928, she started a tumultuous romantic relationship with Diego Riviera and married him the next year. The couple spent the late 1920s and early 1930s travelling around the country and across the United States because of Diego’s work. During this time, she developed her artistic style which is mainly based on Mexican folk culture. In 1944, she painted her famous portrait: The Broken Column, reflecting her poor physical state. Through her work she explores questions of identity, gender class and race. She died at the age of 47 in her beloved Casa Azul.

What I Saw on Water or What the Water...
Frida Kahlo

Self Portrait with Monkey and Parrot
Frida Kahlo

The Land Itself or Two Naked in the...
Frida Kahlo

Self-portrait as Tehuana (or Diego on...
Frida Kahlo

Self-Portrait on the Borderline...
Frida Kahlo

Self-portrait with Diego on my Chest
Frida Kahlo