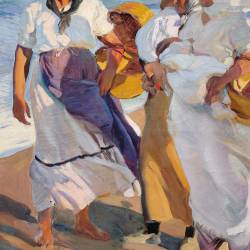 Joaquin Sorolla y Bastida is a Spanish painter born on February 27, 1863 in Valencia. He studied at the Trade and Handcrafts School in Valencia and then at the Academy of Arts in San Carlos. At that time, he met a photographer, Antonio Garcia, who became his father-in-law in 1888 when Joaquin married Clotilde Garcia.  Three children were born from this union, from 1884 to 1889. In 1890, he moved to Madrid. There he participated in numerous local and international exhibitions. He won the medal of honour at the Paris World Fair in 1900. From 1905, supported by merchants and gallery owners, Joaquin Sorolla y Bastida began a series of individual exhibitions. He chose the Parisian gallery Georges Petit for an exhibition in 1906, where he gained notoriety in France, and consequently in Europe. From 1909 to 1911, he made a name for himself in several cities in the United States, supported by the collector Archer M. Huntington, who appointed him to decorate the Hispanic Society Library in New York, presenting scenes from different regions of Spain. The numerous trips associated with this commission weakened him: he had a stroke in 1920, leaving him unable to work afterwards. He died in Cercedilla, Spain, on August 10, 1923.

Clotilde and Elena on the Rocks
Joaquin Sorolla y Bastida

The Gardens at the Sorolla Family...
Joaquin Sorolla y Bastida

A Corner of the Studio
Joaquin Sorolla y Bastida