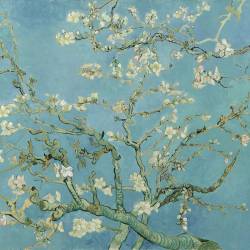 Vincent Van Gogh (1853-1890) was a Dutch Post Impressionist painter and one of the most influential artists in the history of modern western art.

A serious and unstable child, Vincent Van Gogh grew up in a very religious family from old Dutch nobility, which had made its name in the art trade. Torn between his love of painting and the pervasiveness of religion in his life, his career began after he was dismissed from Goupil & Co, following his refusal to see art as a simple commodity. Misunderstood and little-known in his lifetime, Van Gogh's artistic renown reached its peak, granting him modest success with The Starry Night, while his fits of dementia became more frequent than ever. The torment that was the life of Van Gogh was undoubtedly also responsible for his brilliant talent. Inspired by Japanese prints and English engravings, Vincent Van Gogh was a particularly prolific painter; in the space of ten years (from 1880 to 1890), he produced almost 2,000 canvasses. Applying colour in small strokes, without mixing them on his palette, it is the viewer's eye that blends the colours on the canvas at a distance.

Vincent Van Gogh killed himself with a bullet to the chest in Auvers-sur-Oise on 30 July 1890, just after completing Wheatfield with Crows.

Miss Gachet in her garden at Auvers...
Vincent van Gogh

Head of a Skeleton with a Burning...
Vincent van Gogh