JOIN OUR MAILING LIST TODAY
Enjoy exclusive discounts, News about the art scene and much more !
Register now and enjoy 10% off your first order !
SUBMIT
Hokusai 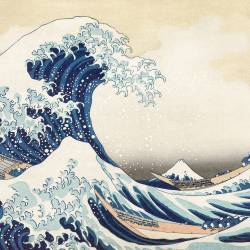 https://en.muzeo.com/sites/default/files/styles/image_basse_def/public/oeuvres/posters/classical/the_great_wave_of_kanagawa134928.jpg?itok=1Q1sZykS
Reproduction d'art
The Great Wave of Kanagawa
(Hokusai)
From 44.42 €From £37.75From 37.01 € HTFrom Excl. VAT £31.46
Affichiste

Katsushika Hokusai, known as Hokusai, was born in Edo, now Tokyo, in October or November 1770.

Adopted by a family of craftsmen, he was by no means predestined to become one of the greatest print designers in the history of art. Despite this, he developed a passion for art from an early age and eventually joined a woodcut workshop, where he engraved the last six sheets for a humorous novel by Sancho. Reassured by his choice, he launched himself headlong into the vocation by joining the workshop of Shunsho, which he was forced to leave after the latter's death. Living in extreme poverty, Hokusai did not give up and assiduously studied Western artists. This patience was rewarded in 1804 when the painter presented a giant daruma hoisted above the rooftops in the courtyard of the Temple of Edo, which had been made using a broom and a bucket of Chinese ink. It was, however, at the age of sixty that Hokusai stopped travelling across Japan and devoted himself to book illustration, which brought him worldwide recognition. This designer of genius left an indelible mark on the art world, and had a major influence on many modern western artists such as Van Gogh and Cézanne.

Hokusai died in Edo on 10 May 1849, after saying on his deathbed: "Just five more years and I would have become a great artist".

The great Wave of Kanagawa
Hokusai

The fields in the hamlet of Umezawa...
Hokusai

Bullfinch on a branch of a weeping...
Hokusai

A wild sea at Choshi
Hokusai

The storm in the top of the mountain...
Hokusai

Kouanon, the goddess of grace and a...
Hokusai

Ejiri in the Suruga province
Hokusai

Japanese Nightingale and Spray of...
Hokusai

The Spirit of the servant Okiku out...
Hokusai

See all
artworks from
HokusaiDiscover