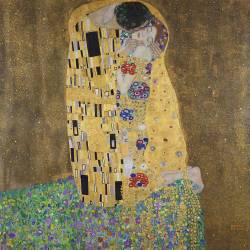 He was undoubtedly one of the greatest painters of the Symbolist movement. He began his career in painting in 1879, as a decorator in the team of Hans Makart, before claiming his artistic independence and opening his own studio. From then on, commissions flooded in and Klimt perfected his style after founding and joining the Secessionist group. His picture Pallas Athena earned him a place among the leading artists of the 19th century, although it was his gold series in the early 20th century that made his name. The Kiss is one of the last paintings in the series and is considered by many to be his most important work. It endures in the collective artistic consciousness and is representative of his genius. Despite his success, Gustav Klimt turned away from gold in his paintings,  inspired by Van Gogh and Matisse, his later paintings reveal the influence of Fauvism and even Pointillism.

Gustav Klimt died of a stroke in Vienna on either 11 January or 16 February 1918, according to different sources.

Lady with a fan
Gustav Klimt

Judith and the head of Holofernes...
Gustav Klimt

Roses under the Trees
Gustav Klimt

Woman with a hat and a feather boa.
Gustav Klimt

Portrait of a woman.
Gustav Klimt

Detail of The Three Ages of Woman,...
Gustav Klimt

The Tree of Life (Frieze of the...
Gustav Klimt

See all
artworks from
Gustav KlimtDiscover