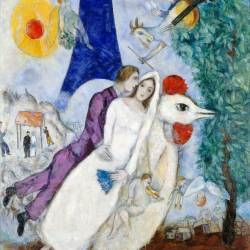 Marc Chagall was born on July 7, 1887 in Liozna, Belarus, into a practising Jewish family. After training at the Saint Petersburg School of Fine Arts, he studied for a while with Léon Bakst. He arrived in Paris in 1910, trained in cubism and fauvism, and spent long hours at the Louvre Museum studying the paintings of great masters. Chagall returned to his native country in 1914 and became responsible for the fine arts of his hometown, where he organized exhibitions and attended to the school. After a visit to Berlin, Marc Chagall returned to Paris in 1925 where he carried out numerous works of illustrations including the Bible. In 1937, he obtained French nationality but went into exile in the United States in 1941 to escape Nazi oppression. In the 1960s, Chagall created the ceiling of the Opéra Garnier following a public commission by André Malraux, then Minister of Culture. In 1974, a second prestiguous commission was entrusted to him: a series of stained-glass windows for the Rheims catedral. Marc Chagall died in 1985 in Saint-Paul-de-Vence.

<span "'="">Marc Chagall was a painter, engraver and major decorator of the twentieth century, out of all movement. His famous works are "Le Violoniste vert", "L'anniversaire" and "Les amoureux".