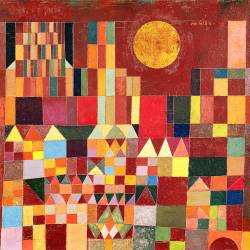 An iconic figure of the 20th century, Paul Klee was born in Münchenbuchsee, a small town next to Bern in Switzerland. He pursued his training in Munich, one of the most important European-class capital of the art and an active centre of Jugendstil. He studied at the Academy of Art of Munich and also worked alongside Franz Von Stuck, renowned symbolist painter. From the very beginning Klee’s work defied convention, and his hesitation between music, writing and painting will only enhance his work. This was followed by an intense period of ontological and theoretical thinking which he documented in his Journal. He then joined the Bauhaus, a German art school operating from 1919 to 1933 that combined craft and fine art, where he gave lessons. The main legacy of Paul Klee is his prolific work (over 9000 pieces) and his theoretical work which certainly impacted art.

Paul Klee died in 1940 in Switzerland.

Birds in the garden
Paul Klee

The sirens of ships
Paul Klee

Portrait of an equilibrist
Paul Klee

See all
artworks from
Paul KleeDiscover