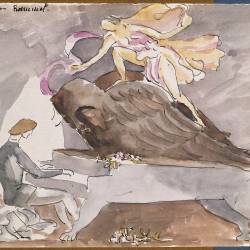 Antoine Bourdelle was born on October 30, 1861 in Montauban. Still very young, Bourdelle began to work with his father cabinetmaker and took drawing lessons at night. In 1876, he went to study at the Ecole des Beaux-Arts in Toulouse. In 1885, Bourdelle arrived in Paris and returned to Alexandre Falguière’s studio. Two years later, his plaster was crowned at the Salon. In 1893, Rodin hired him as a practitioner. In 1900, Bourdelle was hired to decorate the Musée Grévin. It was the beginning of a series of consecrations, such as his first exhibition in 1905, the position of teacher at the Académie de la Grande Chaumière in 1908, a triumphant exhibition at the Salon in 1910 and a new commission for the Théâtre des Champs-Elysées the same year. Antoine Bourdelle dies on October 1, 1929 at the Vésinet, near Paris.