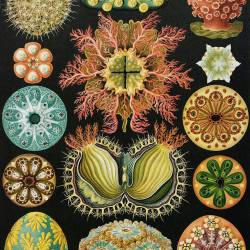 Ernst Haeckel was born on February 16, 1834 in Potsdam, Germany. In 1852, he studied medicine and natural sciences, first in Würzburg, then at the University of Berlin. He obtained his doctorate in medicine in 1857 and began to exercise more by family obligation than by real passion. After a few experiments as a practitioner, Haeckel became professor of comparative anatomy at the Institute of Zoology at the University of Jena. In 1866, Haeckel became Darwin’s disciple and popularized his work in Germany, notably the theory of evolution. At the same time, he made himself known throughout Europe for his extremely detailed representations of marine sponges or jellyfish. His drawings directly influenced Art Nouveau. Ernst Haeckel died on August 8, 1919 in Jena, Germany.

See all
artworks from
Ernst HaeckelDiscover