JOIN OUR MAILING LIST TODAY
Enjoy exclusive discounts, News about the art scene and much more !
Register now and enjoy 10% off your first order !
SUBMIT
Hiroshige 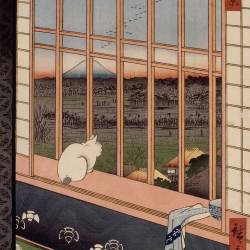 Utagawa Hiroshige (1797 – 1858), was a Japanese ukiyo-e artist, considered to be the last great master of this tradition.

Hiroshige is best known for his landscapes, such as the series "The Fifty-three Stations of the Tōkaidō" and "The Sixty-nine Stations of the Kiso Kaidō"; and for his depictions of birds and flowers. The subjects of his work were atypical of the ukiyo-e genre, whose typical focus was on beautiful women, popular actors, and other scenes of the urban pleasure districts of Japan's Edo period (1603–1868). Hokusai's popular "Thirty-six Views of Mount Fuji" series strongly influenced Hiroshige's choice of subject, however his approach tended to be more poetic and ambient than Hokusai's bolder, more formal prints.

For scholars and collectors, Hiroshige's death marked the beginning of a rapid decline in the ukiyo-e genre, especially in the face of the westernization that followed the Meiji Restoration of 1868. Hiroshige's work came to have a marked influence on Western painting towards the close of the 19th century as a part of the trend in Japonism. Western artists closely studied Hiroshige's compositions, and some, such as van Gogh, painted copies of Hiroshige's prints.

Suigin Grove and Masaki, on the...
Hiroshige

View of the Naruto whirlpools at Awa
Hiroshige

Bullfinch perching on a branch of a...
Hiroshige

Chrysanthemums and a Shrike
Hiroshige

Near Shinto temple of Akiba
Hiroshige

Snowstorm in the mountains and rivers...
Hiroshige

View of the Whirlpools in Awa...
Hiroshige

See all
artworks from
HiroshigeDiscover