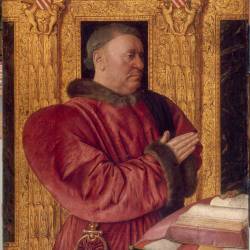 Jean Fouquet was born around 1420 in Tours. His youth and training remain unclear, and it is not known whether he trained in Parisian workshops, for example, as an illumination workshop. Fouquet travels to Italy around 1443 and finds himself diving in Florence during the reign of the Medisis. This journey deeply marked the painter’s pictorial style. Returning to France around 1450, he settled in Tours and worked for the local clergy and eminent members of the monarchical state. In 1475, Jean Fouqet became King’s painter during the reign of Louis XI. He died before 1480.

The Virgin and Child Enthroned from...
Jean Fouquet