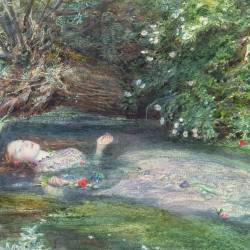 Sir John Everett Millais is an English painter born on June 8, 1829 in Kensington. In 1840, he entered the Royal Academy School. In 1848, he formed the Pre-Raphaelite Brotherhood alongside William Morris Hunt and Dante Gabriel-Rossetti. He received mixed critics for his art. Charles Dickens was against his art, while John Ruskin appreciated his technique, and that of the Pre-Raphaelites. Sir John Everett Millais became an Associate of the Royal Academy in 1853. Following his marriage to Ruskin's ex-wife in 1855, their collaboration ended. At this point, he became a true painter of portraits, with an academic technique, and of genre scene. He gradually abandoned the Pre-Raphaelite style and its theories. In 1863, he became a Royal Academician and in 1896, shortly before his death on August 13, 1896, he became the President of the Academy. His title of baron was awarded to him in 1885.

The Twins, Portrait of Kate Edith and...
John Everett Millais

Conversationof a Couple above a Wall
John Everett Millais