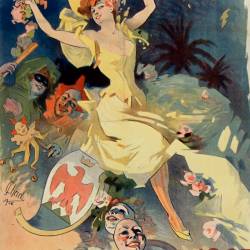 Jules Chéret was born on May 31, 1836 in Paris. After attending the Ecole des Beaux-Arts in Paris, Jules Chéret left for England where he worked in a chromolithography workshop. In 1866, he came back to France and produced his first posters. At that time, he learned the rules of poster making. From 1895 onwards, he also began a career as a decorator: he adorned private mansions with monumental decorations, as well as public buildings such as the Musée Grévin theatre, for which he made the curtain. His works are characterized by the use of bright, appealing colours, a precise retranscription of movement and the presence of his favourites characters, nicknamed the "chérettes", joyful and flirtatious women. Throughout his career, Jules Chéret was particularly close to Henri de Toulouse-Lautrec, Alfons Mucha and Leonetto Cappiello. Jules Chéret died on September 23, 1932 in Nice.

See all
artworks from
Jules ChéretDiscover