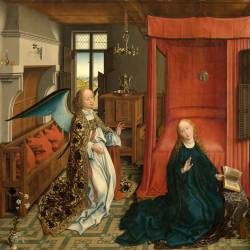 Rogier van der Weyden was born around 1400 in Tournai, France. Under the name Rogier de La Pasture. Little is known about the painter's early years, but it is assumed that he trained in the Robert de Campin’s studio. He is often described as the direct heir of his master. He was also influenced by Jan van Eyck who is a contemporary artist. However, his works show a softened version of Flemish realism. He developed a style characterised by the search of beautiful forms and the psychological representation of characters. In 1435, he moved to Brussels, where he was immediately appointed the city's official painter and ran a flourishing workshop. He benefited from the presence in Brussels of the Duke of Burgundy's court and worked for the ducal entourage. In 1450, he travelled to Rome in Italie.  From then onwards he produces an impressive series of portraits.