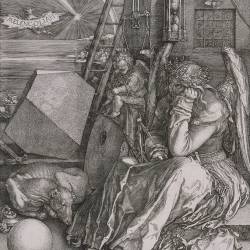 Albrecht Dürer was born on May 21, 1471. In 1494 – 1495 he travelled to Venice, before returning to Nuremberg (his birthplace). From the Italian Renaissance, he borrowed its rationality and pushed the objectification of perspective. Enriched by these artistic discoveries, he laid the foundations of a rich and complex body of work, and excelled in engraving as well as in the painting of religious altarpieces and in the exercise of self-portraiture. He contributed to the development of the printmaking technique, an art form that was still new at the end of the 15th century. He stood out from the German production of his time which was marked by a tortured expressionism. Dürer placed great importance on the composition of the image and the balance of its volumes. For a time, he abandoned painting to concentrate on purely theoretical research, and was the author of numerous theorems, whether on colour or on perspective. Albrecht Dürer was then at the height of his fame. He worked for Emperor Maximilian I and became involved in the political life of the city of Nuremberg. He continued to travel, this time went to Flanders to meet the great minds of his time, such as Erasmus of Rotterdam. Around the 1520s, he embraced the ideas of Martin Luther, and his aesthetic tended towards greater austerity. In 1526, Dürer produced The Four Apostles for the city of Nuremberg, a work considered to be his artistic testament. Dürer died on April 6, 1528.

See all
artworks from
Albrecht DürerDiscover