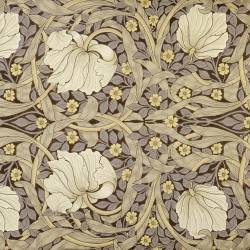 William Morris was born on March 24, 1834. He was born and raised in a wealthy family. He first entered Oxford to study drawing and architecture. In 1856 he met Dante Gabriel Rossetti and the Pre-Raphaelite Brotherhood, which sparked his interest in decorative arts. He was also a poet, novelist, theorist and a major player in the English socialist movement. He was torn between his utopian ambitions for a better society ("the garden city"), which should prevent workers from being alienated by work, and his taste for luxury. Morris was the founder of the Arts and Craft movement, revolutionising the aesthetics of the time and influencing all the decorative arts of the 20th century. Decorative Arts were neglected because of their close link to craftsmanship. Partially thanks to Morris, the decorative arts gained their letters of nobility and became a major art. He produced tapestries, wallpapers and domestic objects. William Morris died on October 3, 1896.

See all
artworks from
William MorrisDiscover