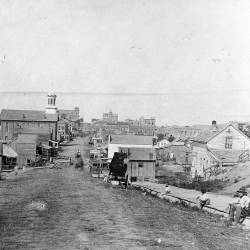 Alexander Gardner was born on October 17th 1821 at Paisley (Scotland).

Alexander Gardner is an American photographer that specialized himself in portraits and war photography. He arrived in the United States in 1856 and was hired as a portraitist by the photographer Mathew B. Brady. Two years later, he opened his own studio in Washington before doing the same in New York. During the American Civil War (1861-1865), he joined Brady as an assistant. In 1863, he definitely left his master in order to open a portrait gallery in Washington while he continued his work as a photo-journalist. He realized many photographs of the American Civil War but also of the President Abraham Lincoln : indeed, the most famous photographs of the President were made by Gardner. He also went to the Wild West in 1867, documented the war of Red Cloud that opposed colonizers and North Native Americans between 1866 and 1868, even though the conflict was born as early as in 1778. Gardner became, during the end of his life, a business man and lived in Washington until his death.

Group of Guides for the Army of the...
Alexander Gardner

View of ditch on right wing, which...
Alexander Gardner