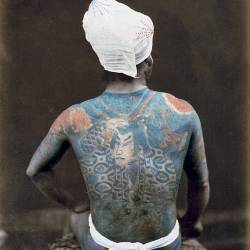 Felice Beato was born in 1832 in Corfou, Greece.

Beato was an italian photographer naturalized english in 1850. He was one of the first to photograph the Asian continent, from its center to its Far East, but also one of the first war photographer. He didn’t limit himself to these genres and quickly became recognized for his portraits and his views and panoramas of the architecture and landscapes of Asian countries but also of the Middle East. These numerous trips that Beato made during his life gave him the opportunity to create images of lands, people and events that the occidental public had no idea of. For example, he became a witness and the reporter of The Indian Rebellion of 1857 (1857-1858) and The Second Opium War (1856-1860). The photographs he took in Japan are groundbreaking : indeed, he was probably encouraged by his contemporaries to color his shots by hand, thus giving them a new kind of intensity. His final years aren’t really known, but it is attested that he continued to travel in Asia and in East Africa until 1899.

Bridge at the Entrance to the town of...
Felice Beato

Bridge of Boats over the Gumti
Felice Beato

North and East Corner of the Wall of...
Felice Beato

See all
artworks from
Felice BeatoDiscover