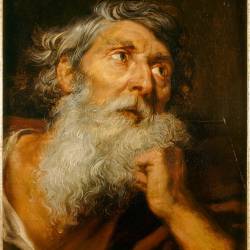 Antoon Van Dyck (1599-1641) was a seventeenth century Flemish painter. He was heavily influenced by his predecessor Peter Paul Rubens, as well as the Italian style by the likes of Titian.

He is best known for his religious and mythological paintings as well as his portraits, particularly those of King Charles I and his court.

Van Dyck was born in Antwerp and his first independent works date from 1615-16. In 1621 he worked for James I of England, but left to visit Italy, where he remained until 1627. His aristocratic rendering of Genoese patricians were very well received in that city. After a second period in the Netherlands, greater success awaited Van Dyck when he settled at the English court in 1632. His authoritative and flattering representations of Charles I and his family set a new standard for English portraiture to which members of the court were keen to aspire.