JOIN OUR MAILING LIST TODAY
Enjoy exclusive discounts, News about the art scene and much more !
Register now and enjoy 10% off your first order !
SUBMIT
Rembrandt 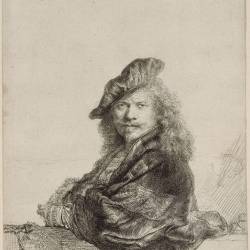 Rembrandt van Rijn was born in Leyde in 1606.

The Golden Age of Dutch painting, as well as the history of art, is indebted to the contribution of Rembrandt van Rijn. This talented man undoubtedly left his mark on the world, through his mastery of painting and his play with light and shadow, he remains today a crucial artistic reference. After studying under Pieter Lastman, Rembrandt opened his own workshop and came to know a certain success from 1630. His wife introduced him into the inner circles of the middle class and many subsequent commissions from wealthy patrons allowed the Rembrandt family a luxurious lifestyle. The peak of this success for Rembrandt is represented by the work The Night Watch, 1642, which was revolutionary in its conveying of a sense of movement and its use of clair obscur.

Following the death of his wife , Rembrandt’s painting grew much more sombre. This allowed however for a renaissance and rediscovery of the effects of light in his work ten years later. His works are characterised by heavy, thicker brushstrokes, far from the delicacy and precision characteristic of other Dutch painters of his time.

Rembrandt died impoverished in 1669 in Amsterdam.

Rembrandt was a painter of the Renaissance period, specialised in history painting.

Among his most famous works are The Night Watch and The Anatomy lesson of Doctor Tulp.

Christ in the Storm on the Lake of...
Rembrandt

The Parable of the Rich Fool
Rembrandt

Return of the Prodigal Son
Rembrandt

'Tronie' of an Old Man
Rembrandt

See all
artworks from
RembrandtDiscover