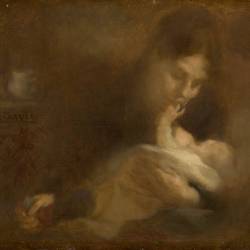 Eugène Carrière was born on January 16, 1849 in Gournay-sur-Marne, France. He went to Strasbourg where he studied lithography. In 1869, he joined the École des Beaux-Arts in Paris, in the studio of Alexandre Cabanel, where he learned to observe nature and to visit museums. He exhibited at the Salon in 1879 and attracted critics and collectors. Introduced into political and cultural life, he began to paint portraits of different artists such as Paul Gauguin or Auguste Rodin. Eugène Carrière subsequently held several exhibitions and participated in the Universal Exhibitions of 1889 and 1900. His work gradually evolved into a monochrony of ochre and earth that left him misunderstood by the public. At the end of his career, he became president of the Salon d'Automne. Eugène Carrière died on March 27, 1906 in Paris.

See all
artworks from
Eugène CarrièreDiscover