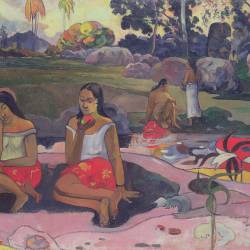 The son of the instigator of a coup d'état that propelled Louis-Napoleon Bonaparte to the imperial throne and the descendant of a viceroy of Peru, nothing predestined him to become a mere Parisian stockbroker. His tutor, a great art enthusiast, discovered his artistic talent and introduced him to the Impressionists, making him aware of his love of painting. Aged 34, Gauguin abandoned his job and decided to devote himself to painting as he travelled the world, leaving his family behind, alone and in poverty. On the Island of Hiva-Oa, he witnessed tropical paradises that gave a new meaning to his art, which changed despite retaining its powerful colour palette. Against all odds, Gauguin refused to stabilise his changing art or lifestyle, even if it meant risking everything in his frenetic quest for happiness. His painting was in keeping with this marginal existence, idealised without being dreamlike, real without being realistic, and inspired by the Nabis.

Paul Gauguin died in the Marquesas Islands, exhausted and weak, on 8 May 1903.

Ta Matete (We Shall Not Go to Market...
Paul Gauguin

Fatata te Moua (At the Foot of the...
Paul Gauguin

See all
artworks from
Paul GauguinDiscover