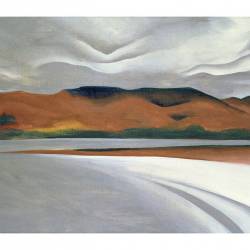 Georgia O'keeffe was born on November 15th <span "'="">1887 in Sun Prairie, Wincounsin. She took an early interest in art and in 1905 left for Chicago to study at the Art Institute and then joined the Art Students League in New York. There, she met for the first time Alfred Stieglitz, a gallery owner and photographer. In 1908, Georgia O'keeffe doubted everything and stopped painting for nearly four years. In 1912 she did a summer internship at the University of Virginia, which was followed by courses at Columbia University in the Art Department for three years. Then, she worked for a while as a teacher in small towns in Texas. In 1916, she exhibited in Alfred Stieglitz’s gallery. Georgia O'Keeffe finally moved to New York and married Stieglitz in 1924. After his death in 1946, she moved to New Mexico, where she became internationally renowned. Georgia O'Keeffe died on March 6th 1986 in Santa Fe, New Mexico.

Georgia O'Keeffe was a painter, a key figure in the New York art scene of the 20th century. Her famous works are "The White Flower", "Antelope Head with Pedernal" and "Lake George".