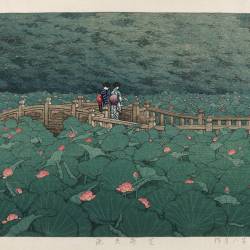 Hasui Kawase was born on May 18, 1883 in Tokyo Japan. He was a Japanese painter and illustrator and one of the most prolific artists of the Shin-Hanga movement. This movement, created at the beginning of the 20th century on the initiative of the printer Shozaburo Watanabe (whose descendants still run the publishing house), had the desire to renew Japanese printmaking, whose production had been strongly impacted by the introduction of photography by Westerners following the forced opening of the country in 1853. Hasui Kawase’s desire to combine the tradition and themes of Hokusai and Hiroshige’s prints, with the modernity of Western techniques which aimed at creating light effects, gave rise to an electric art form mastered by Hasui Kawase very quickly. Travelling often throughout Japan, Hasui Kawase draws landscapes and temples through the seasons. In his prints, the contrast between light and shadow is often strong. The palette allows the artist to represent a wide range of Japanese landscapes. The minimal presence of characters adds to the feeling of sadness and even melancholy to his work. Kawase Hasui died on November 7, 1957 in Tokyo Japan.

Pine trees on the beach with Mount...
Hasui Kawase

See all
artworks from
Hasui KawaseDiscover