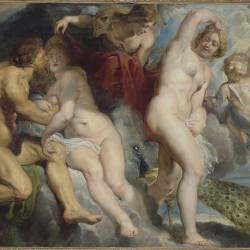 Peter Paul Rubens was born in 1577 in Siegen, Germany. After receiving a humanist education, he worked alongside various artists such as Tobias Verhaecht, Adam van Noort and mostly Otto Venius. He then travelled to Italy, a true turning point in his career that will largely shape his powerful style. This stay in the cradle of the Renaissance, imbued him with a great archaeological and artistic culture. Rubens is often presented as the most influential baroque artist in northern Europe of the 17th century, the dominant style at that time. Characterized as a bold way of painting and a very theatrical style, Baroque is mainly defined by movement, intense emotion and dramatic contrast and lighting. Although is artistic output is vast and varied, Rubens is particularly known for his spectacular religious, mythological and historical painting. As a famous international figure, Rubens received a huge demand for his work throughout his career and was employed by some of the greatest patrons in Europe. Lastly, throughout his life, Rubens built himself a strong cosmopolitan personality which led him to a short diplomatic career, an often-unknown aspect of his life, working both for the crown of Spain and the Netherland.

Rubens died in 1640 in Anvers ad his work will persist, inspiring many future generations.

The Descent from the Cross
Peter Paul Rubens