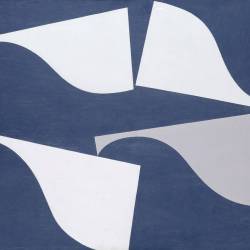 Sophie Taeuber-Arp was born on January 19, 1889 in Davos Platz, Switzerland. In 1907, she enters the School of Arts and Crafts in St.Gallen and then, in 1910, went to Munich to study applied arts. She eventually joined the Hamburg School of Applied Arts in 1912 and moved to Zurich in 1914. She quickly abandoned figurative subjects and launched herself, alone, into abstract art, which was still very innovative throughout Europe. Her work particularly attracted the attention of Jean Arp, whom Sophie Taeuber met in 1915. She followed him later in Dadaism. The couple joined Paris then Strasbourg in 1924 where Sophie Taeuber-Arp was commissioned for the decoration of the hotel Hannong then for that of the Aubette, which the Town Hall wished to transform into a theatre. After a failed attempt to flee to the United States in 1942, the couple finally went into exile in Switzerland. Sophie Taeuber-Arp died on January 12, 1943 in Zurich.

Sophie Taeuber-Arp was a painter and pioneer of abstract art. Her famous works are "Fluttering forms", "Point on Point" and "Rising, Falling, Flying".

Composition in a circle
Sophie Taeuber-Arp

Composition of Circles and...
Sophie Taeuber-Arp