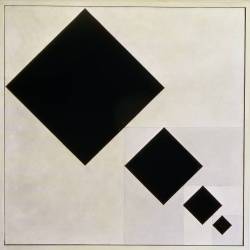 Theo Van Doesburg (1883-1931) was a Dutch painter, writer and architect and founder of the De Stijl movement.

After studying acting he descided to turn his hand to painting. In 1917 he founded the De Stijl review with architect Jacobus  Johannes Pieter Oud and artist Piet Mondrian. The De Stijl review uphelp their optimistic beliefs in modernity and true expression through abstraction and became an entire artistic movement in its own right. Van Doesburg’s painting was concerned with pure colour and abstraction, similarly to Mondrian, until 1925 when he introduced the diagonal line into his compositions. He was also part of the Dada movement from 1921. He wrote many Dada style poems and from here he deepend his theoretical investigations and gave a number of conferences, some of which took place at the Bauhaus school and provoked its subsequent break away from its expressionist teaching.

His subsequent influence on modern art, architecture and design stretched far beyond Holland.

Aubette, design for the Stage, for Le...
Theo van Doesburg