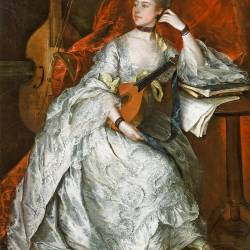 Thomas Gainsborough was born on May 14, 1727 in Sudbury. He was an English painter and draughtsman who specialised in portraits and landscapes. Trough the study of 17th century Dutch landscape, Gainsborough discovered his taste for this genre. Landscape had become popular by the 1740s, thanks to English collectors, most of whom were returning from their Grand Tour. Many of his landscapes show an influence of Rococo art, which is particularly in the compositions. Despite his preference for landscapes, Thomas Gainsborough knew that portraits would be more profitable for him economically. Thus, he began to paint portraits in Suffol, where he lived after his marriage in 1746 to Margaret Burr, the illegitimate daughter of the Duke of Beaufort. In 1759, he moved to Bath, with the goal of making himself known to a wider public, and continued to execute portraits. There, his artistic style came closer to that of Van Dyck, whom he admired. In 1774, he returned to England, where he painted portraits and landscapes. Thomas Gainsborough died on August 2, 1788 in London (England).

A Group Portrait of the Misses...
Thomas Gainsborough

A Lady walking in a Garden
Thomas Gainsborough

See all
artworks from
Thomas GainsboroughDiscover