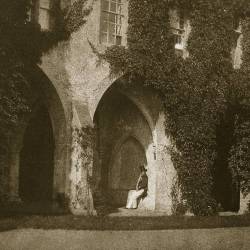 William Henry Fox Talbot is an English photographer who didn’t limit himself to the practice of one unique medium : indeed, he is, at the same time, a mathematician, an astronomer, a botanist, an archaeologist, a philologist and a linguist. He began to take an interest in dark-room images, then in a light rooms in 1833. The latter technique required prior drawing. Talbot eventually sought to obtain sustainable images by another mean, his ultimate goal being to represent the real on paper. His various photographic experiments led him to the creation of the calotype, a technique he patented in 1841, but which was quickly challenged by the daguerreotype, which produces a unique image on a metal support. The calotype, allows to obtain a direct negative paper and thus the possibility of reproducing the images which lead to the creation of the first illustrated book with photographs, Pencil of Nature, published in 1844. His photographs are often foggy and give a feeling of nostalgia, a sensible melancholy that is only a reflection of the aesthetic considerations of the time.

View of the Boulevards of Paris
William Henry Fox Talbot