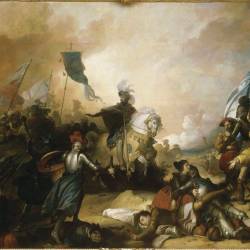 Alexandre-Evariste Fragonard was born in Grasse on 26 October 1780.

Son of Jean Honoré Fragonard, he was immersed in art throughout his life, making him one of the most impressive artists of the early 19th century. With a very different artistic approach from his father, he made his name in the troubadour style, and was inspired by his two great masters, Fragonard Sr and Jacques-Louis David. The painter's sensitivity, driven by a para-romantic pictorial, saw him build his reputation in neo-Classical art. Buoyed by his influences and undeniable talent, Fragonard regularly exhibited his work throughout his career and was rewarded with important commissions as a result, including the overhead lighting for the Louvre. Brought up on national and medieval history when ancient art was at the peak of its popularity, the painter nevertheless succeeded in carving out a niche in the history of art. Alexandre-Evariste Fragonard made a distinguished name for himself in Romantic art, skilfully playing with chiaroscuro and using his rich colour palette to bring detail to his canvasses.

Joan of Arc at the stake
Alexandre-Evariste Fragonard

Saladin I in Jerusalem
Alexandre-Evariste Fragonard