JOIN OUR MAILING LIST TODAY
Enjoy exclusive discounts, News about the art scene and much more !
Register now and enjoy 10% off your first order !
SUBMIT
Benjamin-Constant 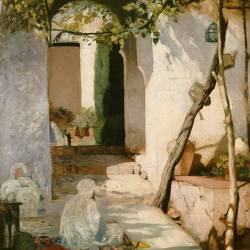 Benjamin-Constant was born on June 10, 1845 in Batignolles-Monceau, near Paris, France. He was raised by his aunts in Toulouse, after the death of his mother. In 1859, he began studies at the School of Fine Arts of Toulouse. In 1866, after obtaining a scholarship from the city of Toulouse, he left for Paris and enrolled in the studio of Alexandre Cabanel. Two years later, he went to the Salon and quickly obtained the recognition of the State, which bought him his first work. In 1870, Benjamin-Constant left for Tangier. Influenced by Moroccan culture, he made the Orientalist style his specialty. From 1888, he travelled widely between the United States and Canada, where his works were appreciated. Benjamin-Constant died on May 26, 1902 in Paris.

Entry of the Turks of Mohammed II
Benjamin-Constant

The attendance of a lord
Benjamin-Constant