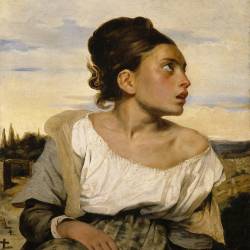 A memorable figure of his century, Eugène Delacroix was born in 1798 at Charenton-Saint-Maurice in the Paris area. From a young age, he received a political, cultured and wealthy upbringing within a highly Parisian atmosphere. Quickly, young Delacroix developed a strong interest in arts when entering Pierre-Narcisse Guerin’s studio in 1816 where he received a significant formation. His learning is the one of a classic painter, a designation that he will claim his whole life. Inspired by great masters such as Titian, Veronese and Rubens, his paintings indicate a romantic approach with the stale classism of Ingres.
Described as a leading figure of the French romantic movement, his artworks are great examples of the romantic vision of his era which often exalts violence and passion, celebrates nature, explore anxiety and melancholy as well as giving a glimpse of the contemporary history. Those considerations are key to the romantic French movement, an artistic current born at the beginning of the 19th century in both literature and arts. Heir of the troubled times of the end of the 18th century (such as the French Revolution and Napoleonic Wars), French romanticism exposes its viewer to a new vision and innovative of the world. Amongst its most famous representatives, we find Delacroix, but also Goya, Friedrich, Turner and Gericault. Delacroix’s most famous painting from this time has to be Liberty leading people, painted in 1830 and presenting an allegory of a contemporary event.
His travel to North Africa around 1832 is a turning point in Delacroix’s career. This visit has broadened the range of his work, then leaning towards more orientalist subjects. Throughout his trip he produced a diverse type of works varying from notes to sketches.
Eugène Delacroix died in 1863 in Paris, leaving for the future generations of artists and History of Art a great production of artworks revealing the troubled times he lived through marked by political, economic and spiritual changes.

See all
artworks from
Eugène DelacroixDiscover