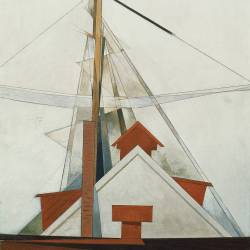 Charles Demuth was born on November 8, 1883 in Lancaster, Pennsylvania. He studied at the Pennsylvania Academy of Fine Arts, from which he graduated in 1910, then travelled to Europe between 1907 and 1913. There he discovered cubism in Paris, from which he drew much inspiration in his works throughout his career. Back in the United States, he abandoned illustration in favour of watercolour. Towards the end of his career, his work is marked by urban landscapes and billboards. Charles Demuth is one of the main representatives of Precisionism, an American movement inspired by Cubism. He died October 23, 1935 in Lancaster.

Charles Demuth was an American painter of the 20th century. His famous works are "Tumblers", "Chimneys, Ventilators" and "I saw the figure 5 in gold".

I Saw the Figure 5 in Gold
Charles Demuth

Honore de Balzac's 'The Girl with the...
Charles Demuth

In the Key of Blue
Charles Demuth

See all
artworks from
Charles DemuthDiscover