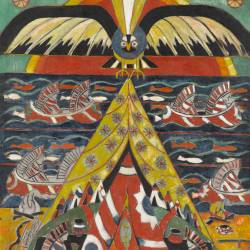 Marsden Hartley was born on January 4, 1877 in Lewiston, Maine, USA. He first studied at the Cleveland School of Art before going to New York to study at the Chase School and then at the National School of Design. From 1909 until World War I, Stieglitz exhibited Hartley's work at his Fifth Avenue gallery on numerous occasions. During his life, Hartley travelled extensively, particularly in Europe, where he admired the Cubists and began a series of abstract paintings. He also lived in Mexico from 1932. The artist spent the last ten years of his life between New York and Maine, where he was born. He died on September 2, 1943 in Ellsworth, Maine.

Marsden Hartley was an expressionist and abstract painter of the twentieth century. His famous works are "Indian Fantasy", "Abstraction" and "Smelt Brook Falls".

Birds of the Bagaduce
Marsden Hartley

Weary of the Truth
Marsden Hartley