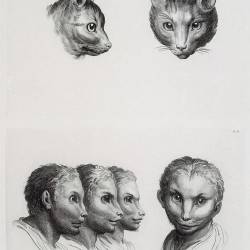 Charles Le Brun (1619-1690) is one of France's most renowned painters of the 17th century. He was the Royal Painter in the court of King Louis XIV as well as founding member and Director of the Royal Academy of painting and sculpture.

The son of Nicolas Le Brun, a master sculptor, and Julienne Le Bé, who came from a family of master writers, he started his artistic training with his father before joining the workshop of François Perrier in 1632. In 1634 he transferred to the studio of Simon Vouet and then studied under Nicolas Poussin, with whom he travelled to Italy from 1642-1645. This course of studies led him to develop his classic style of painting which was highly revered on his return to France. He began working for Louis XIV at the end of the 1650's and in 1661 was placed in charge of the decoration of the Chateau de Versailles. His most famous contributions to this project are the Hall of Mirrors (1678-86) and the rooms of War and Peace (1685-6). Le Brun also designed most of the sculptures in the garden of Versailles. He was a founding member of the Royal Academy of painting and sculpture in 1648, where he passed on his Baroque and Classic influences and belief that painting should be more intellectually stimulating than visually.