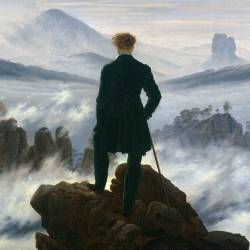 https://en.muzeo.com/sites/default/files/styles/image_basse_def/public/oeuvres/paintings/classical/the_wanderer_above_the_sea_of_134266.jpg?itok=dzCoAJEA
Reproduction d'art
The Wanderer above the Sea of Fog
(Caspar David Friedrich)
From 39.17 €From £33.3From 32.64 € HTFrom Excl. VAT £27.75

Caspar David Friedrich was born on September 5, 1774. Caspar David Friedrich was a major German painter and draughtsman of the Romanticism movement. He was deeply affected by the death of almost all of his family members that occurred between 1781 and 1791. Indeed, death, and nature are two dominant themes in his works. He uses nature as an expression of the sublime. Friedrich first studied at the University of Copenhagen and was influenced by Nordic mythology. He also wanted to infuse his paintings with spirituality and a certain mysticism. He therefore came into contact with Goethe, the leader of German Romanticism in literature, with whom he kept up an extensive correspondence. Unlike artists such as Schinkel and Goethe, Friedrich refused to travel to Rome all his life because he feared that the roman landscape would influence to much his paintings. Caspar David Friedrich died on May 7, 1840.

The Wanderer above the Sea of Fog
Caspar David Friedrich

The Dreamer or the Ruins of the Oybin
Caspar David Friedrich