JOIN OUR MAILING LIST TODAY
Enjoy exclusive discounts, News about the art scene and much more !
Register now and enjoy 10% off your first order !
SUBMIT
Nadar 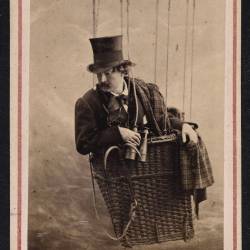 Nadar was born on 5 April 1820 in Paris. He began working as a journalist at an early age, studying medicine together in Lyon. He quickly became an amitier with such prestigious feathers as Beaudelaire, Hugo, Balzac or Lamartine. In 1842, under the July Monarchy, Nadar became a journalist at Commerce and found himself under heavy police surveillance. In 1846, he began his career as a carricaturist for some newspapers such as the famous Chivarivari. Finally, Nadar found his style in photography, which was still very little known by the general public. In 1858, he was the first to carry a camera in a balloon, making him the first aerial photographer. Nadar gradually became known as a portraitist and even became the photographer of celebrities such as Sarah Bernhardt, Gustave Courbet and Eugène Delacroix. In 1860, Nadar opened a department store on Boulevard des Capucines, where he dedicated, in 1874, a floor for the exhibitions of his impressionist friends. He died on March 20, 1910 in Paris.

Nadar was a late 19th-century French cartoonist and photographer, known for his portraits of celebrities. His famous works are "Beaudelaire", "Nadar dans sa nacelle" and "Sarah Bernhardt".

Nadar was particularly linked to Adrien Tournachon and Honoré Daumier.