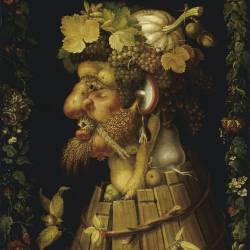 Giuseppe Arcimboldo was born 1527 in Milan. He is said to have assisted his father during his work for the cathedral of Milan in particular in the field of stained glass boxes. However, little is known about his learning. He quickly became known and, in 1562, he was called to serve at the Habsburg Court in Prague. He made his famous Four Seasons series, where anthropomorphic still lifes are composed of fruits, vegetables or plants. Subsequently, he created other series in particular on the trades. Arcimboldo ended his career full of glory and died in 1593.