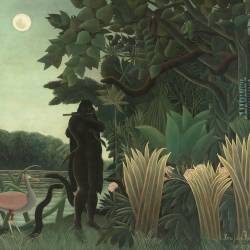 Henri Rousseau, known as the Douanier Rousseau, was born on May 21, 1844 in Laval. The painter's artistic career began late: he only started to paint in 1872, at the age of 28. In 1886, he took part in the Salon des Indépendants where he was heavily criticised for his “naïve style” and lack of proportion. His nickname "le Douanier" was initially a mockery of his job. As he participated in the Salon des Indépendants, he made a name for himself among his fellow artists: Félix Vallotton, André Derain, Henri Matisse and Pablo Picasso. In 1901, he became a drawing teacher at the Association Philotechnique. The Douanier Rousseau's artistic style is characterised by its exoticism. Although the painter never left Paris, he was inspired by the great gardens of his time: the Jardin des Plantes, the Jardin d'Acclimatation and the botanical magazines that flourished at the end of the 19th century. Le Douanier Rousseau died on September 2, 1910 in Paris.

Monkeys in the Jungle
Henri Rousseau

The Repast of the Lion
Henri Rousseau

A View of the Isle Saint-Louis from...
Henri Rousseau

An Allegory of the Révolution with a...
Henri Rousseau

Fight between a Tiger and a Buffalo
Henri Rousseau

See all
artworks from
Henri RousseauDiscover