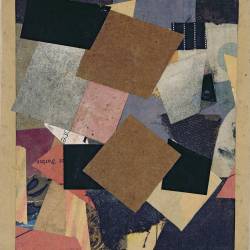 Kurt Schwitters was born on 20th June 1887 in Hanover. In 1909, he returned to the Academy of Dresden where he studied drawing and painting, then went to Berlin to train. From 1917, he began to take an interest in expressionism and abstract art. In 1919, after being refused to the Dada club in Berlin, Schwitters founded his own movement, the Merz. It is characterized by techniques of bonding by fusion, innovative at the time. In 1923, Kurt Schwitters even created a magazine and an advertising center under the name of Merz. After the Nazis came to power, Schwitters first went into exile in Norway from 1930 to 1940 and then in England from 1940 to 1948. He died on 8th January 1948 in Ambleside, England.

For my dear Syndetikon
Kurt Schwitters

See all
artworks from
Kurt SchwittersDiscover