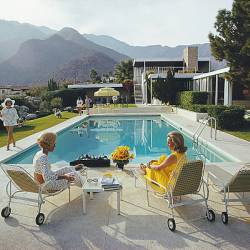 At the peak of his artistic talents in the 1950s and 60s, he was influenced by the golden age of high society, the stronghold of his creativity. Uninhibited and close-knit, this elite lived at full throttle, starting afresh in a society broken by the horrors of the war. Better than anyone else in this medium, this photographer of genius succeeded in capturing these moments of high-society life without pretension, allowing him to be readily accepted among the world's highest social circles. Slim Aarons's fame was not slow in coming, and his shots, while retaining a disarming naturalness, are evidence of his love for high society. An inveterate perfectionist, he found in this world a perfectly innate sophisticated appeal, perfectly in harmony with his artistic consistency. In his art photography, Slim Aarons reveals an ode to elitism, illustrating a dream of ultimate beauty of a society deemed inaccessible.

Eye of the Beholder
Slim Aarons

Tennis In The Bahamas
Slim Aarons

See all
artworks from
Slim AaronsDiscover