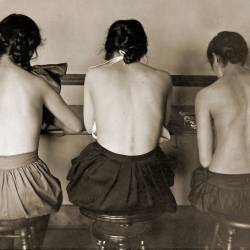 This American photographer used photography as a mean to testify the social suffering of the most disadvantaged on the East coast of the United States, whether children or not, workers or farmers. If he first studied sociology in Chicago and then in New York where he moved in 1901, he finally decided to teach - he even had Paul Strand as a student - and to become a full-time photographer. In 1906, Hine began working for the National Child Labor Committee, the American Red Cross, and the Works Progress Administration and used the photographic medium to create a series of photos whose primary purpose was to strike the viewer and to make him aware of the misery in which many Americans and immigrant workers lived.  His photographic investigations for journals such as The Survey multiplied and allowed the development of a new kind of photojournalism. His photographs, sometimes staged, are striking because of the intensity of their blacks and whites, but also, paradoxically, by their objectivity, devoid of pathos. Despite Hine’s efforts to account for the upheavals in the United States during this post-industrial period, orders were becoming increasingly rare after the 1920s because of the popularity of new photographers such as Walker Evans or Dorothea Lange. Yet, in 1930, he was commissioned to take photographs of the construction of the Empire State Building. The resulting work is one of Hine’s most famous.

One of the smallest spinners in the...
Lewis Wickes Hine

View of Lower Manhattan from the...
Lewis Wickes Hine

Where the boys spend their money
Lewis Wickes Hine