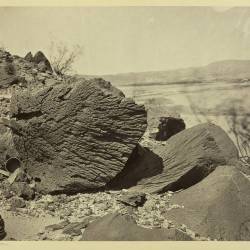 Timothy O'Sullivan was  an American photographer best known for his pictures of the Civil War (1861-1865) and for his landscapes of the American West. He was an apprentice in Matthew B. Brady’s in which he met Alexander Gardner. On the occasion of a photographic documentation mission of the Civil War, O'Sullivan accompanied his master as an assistant. Later, he left Brady's studio, eager to prove himself: he showed corpses in his potographs and broke free from the traditional codes of wars’ representation which previously privileged the vision of armies at rest, thus proposing, through his works, a macabre and sordid reality. After the war, O'Sullivan turned landscapes. Between 1867 and 1869, he accompanied Clarence King's 40th parallel geological exploration mission to the United States as an official photographer and reported views of mines and geological sites. Between 1871 and 1874, he traveled three times to the south-west of the United States where he made powerful and carefully composed panoramic views, as well as portraits of Indians encountered during his travels. In 1880, he was appointed head of the photographic department of the Ministry of Finance, a function he occupied only a few months before being swept away by tuberculosis.

The Church of San Miguel, the Oldest...
Timothy O'Sullivan

The South Side of Inscription Rock
Timothy O'Sullivan