JOIN OUR MAILING LIST TODAY
Enjoy exclusive discounts, News about the art scene and much more !
Register now and enjoy 10% off your first order !
SUBMIT
Tintoretto 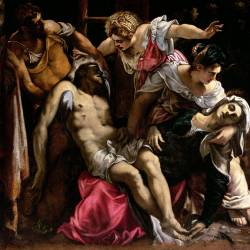 https://en.muzeo.com/sites/default/files/styles/image_basse_def/public/oeuvres/paintings/renaissance/the_deposition_from_the_cross139158.jpg?itok=4Ayc_QcX
Reproduction d'art
The Deposition from the Cross
(Tintoretto)
From 35.47 €From £30.15From 29.56 € HTFrom Excl. VAT £25.12

Jacopo Robusti, known as Tintoretto, was born in 1518. Born into a family of dyers, he showed an early interest in the arts, and his father sent him to train in a small craftsman's workshop, where he was nicknamed "Tintoretto" (the little dyer). He was then working in Titian’s workshop. However, he did not stay with him for long. Legend holds that the master, realising his pupil's dazzling talent, sent him away for fear of being overshadowed by him. The extraordinary audacity of the artist who was a part of the Mannerist trend, enabled him to deploy a whole range of colours and plays of light in his paintings. Tintoretto's art is also marked by the image of his city, Venice, and his ardent religiosity which reflects in his original iconography. Tintoretto died in 1594, in Venice.

The Adoration of the Shepherds
Tintoretto

The Capture of Constantinople
Tintoretto

A Procurator of Saint Mark's
Tintoretto

A Striding Youth with His Arms Raised
Tintoretto

Christ and the Woman of Samaria
Tintoretto

Christ at the Sea of Galilee
Tintoretto

Detail from the Crucifixion
Tintoretto

See all
artworks from
TintorettoDiscover